Progress this month has been about incremental changes to make the game more fun to play.

You can now assign security team members to investigate a character, house, star system, faction, or league.  During an investigation, you will gradually find out information about that object.  For example, you may discover family members for characters, claimants to rule for star systems, the member systems for factions, etc...  If the investigation is on a character, there is a chance that you will discover some of their secrets.

Investigations can give you more political options.  For example, by finding a character with a legitimate claim to rule a star system, you get a more acceptable way to challenge its current ruler.  Its also a way to discover more of the map, as investigating a star system or faction will reveal neighbouring star systems.

You can now use your security team to cover up secrets.  Secrets have a base discovery difficulty (Easy, Medium, Hard, Very Hard, and Never... the latter meaning that the secret cannot be discovered, only revealed by characters that already know it).  When you cover up a secret, you spend money to make it one step harder to discover, and you can repeat the action until the secret cannot be discovered at all.  This makes secret actions much more useful.  In the current alpha build, secrets are rarely worth the risk.  By being able to cover them up, you can now use tools such as murder or seduction where appropriate.  Of course, since your Head of Security is covering up your secrets, you will want to make sure to stay on their good side (or dispose of them permanently). 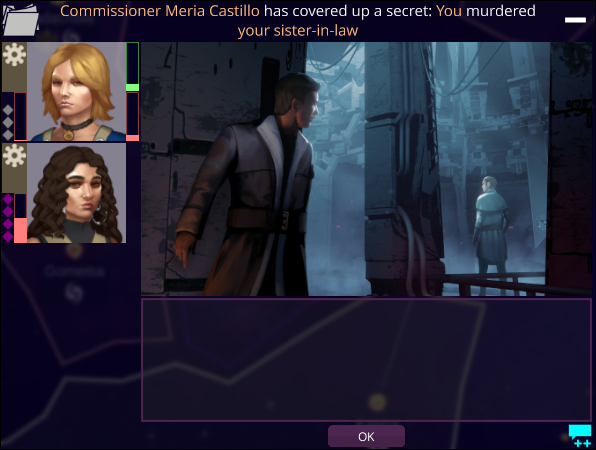 Covering up a secret

In the current alpha build you assign house members to diplomacy, giving you a universal bonus to opinion.  This is too simplistic.  To make diplomacy more about managing who to send your ambassadors to;
- I've reduced the size of this universal bonus (except for vassals)
- I've increased the bonus generated by having an ambassador in a foreign house
- Ambassadors sent to leading houses now have a small effect on your approval from the rulers within that faction as well

Lastly, it is now possible to swap an ambassador with another at a foreign court, without having to recall them and cause offence.

I finished the work I talked about last month, and I'm comfortable that the solution is as good as I can achieve.  One more interesting change that's come out of that is a tweak to the History panel.  It now opens up filtered to the handful of most important updates about an object.  This is much more digestible, and the History panel is now a great way to recap a character and remind you of who they are and why they're important to the story. 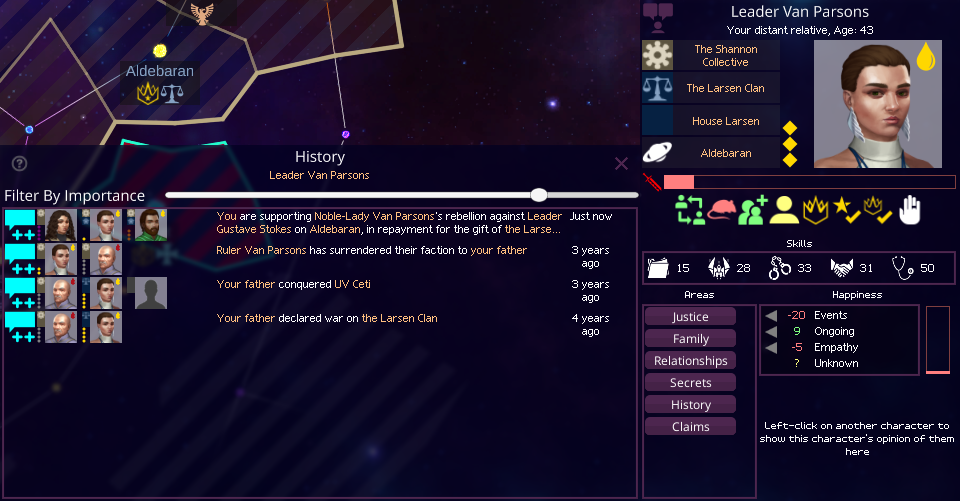 How has this character been involved in the story?

I've invested a lot of time this month to just playing the game.  That seems like a funny thing to say, but finding enough time to play the game is tough.  It's hard to get a real sense of the mechanics of any game without several playthroughs.  Because a game of Star Dynasties is meant to last multiple evenings, "several playthroughs" is a lot of time.  Given that I'm constantly tweaking and changing the game (and frequently breaking my own saves), its a real challenge to have a comprehensive understanding of what the game is like to play at any one time.  Every now and then I come across something that's the consequence of a change I implemented months back.

One thing I am working towards is establishing the journey that the player goes through in a game.  A big part of it is the way your empire's stability decays as it grows;
- When you conquer new territory and install your cronies to rule it, you build up enemies that can come back to try to recover their birthright
- Bringing new vassals under your wings makes you responsible for helping them with their grievances
- More vassals means more opportunities for internal squabbling
- An expanding and successful bloodline creates competitors to your throne
- The administration demands outstrip your house's capabilities, forcing you to carve up your empire
- A larger empire can be harder to defend military (not yet reflected in the game mechanics)
- Succession is a difficult time that tends to reverse some of the gains you've made.  This is because allies of the old leader can be very cool to the new leader, and he or she is usually much less capable
- Etc, etc...

The player's challenge is to maintain political stability as they grow their empire, and to weather life's misfortunes.

One thing that's good to see is how the new Story Events play out in practice.  Even the very small pool that I've implemented so far have started to flesh out the world and bring characters to life.

My focus over the next few weeks is adding more story events into the game, and starting to work on a major system - Negotiation.  This will emulate the way diplomacy worked in Sid Meier's Alpha Centauri.  You make a request of another character, and they can refuse, accept, or counter with a request of their own.  I will map all the current requests / offers to the new system.  It should allow for some interesting trades, e.g. "give me Sirius in return for my son's hand in marriage".  Also I'm trying to work out whether blackmail or threats could be a part of the system.

I'm building up to either Early Access or a Kickstarter (with beta access as a reward) in June, so I'm also working to polish some of the rougher edges of the current build.